...during lunch....and a woman in front of you says, "I don't know yet."
"Okay, just order when you're ready."
Three minutes pass (three more cars pulled up behind me)

She gets up to the window and adds a milkshake.
Posted by Jack at 3:57 PM No comments:

I was [slightly] excited about a new "pub" opening in Kennesaw/Marietta, GA called "Tilted Kilt." "WAS" being the keyword here. I decided to do a google search on it to find out more, and boy was I not only disappointed but insulted as well.

I should have known what type of place it would be with cheap signs at the end of exit ramps, "Tilted Kilt Girls Wanted."

So I got past the name and the "uniforms" of the "girls," and I moved onto the menu. Not a single item was remotely "pub-fare" as it claimed to be: hamburgers, chicken fingers, hot wings, nachos (tortilla chips), etc. are NOT traditional pub fare, and you'd be laughed out of Europe trying to pass ANY of those items off as "food for a pub."

Let's call it what it really is: "Hooters with prettier 'uniforms.'"

So, again, we have bastardized something that is revered all around the world: an honest to goodness pub.

Is it that hard to say "Thank You?"

Tonight, Andrew and I were over at Shane and Kim's house eating pizza and watching movies. It was pouring rain when we got there, and it had been raining all day. Andrew looked up and saw a small soaking wet Yorkie wandering through the yard.

He was clearly lost wandering up the hill, down the bank, into the trees. Andrew donned his shoes and grabbed a piece of pizza crust and went outside. The little guy came running up to Andrew who picked the super-saturated little guy up in his arms and walked to the front. I had come outside to meet the wiggly wet worm, and I called the phone number on his tags.

She came trudging over to us. I went inside. Andrew handed her the little guy, and she just looked at Andrew then looked at the dog and said, "You are in SO much trouble!" and she walked off!

What the Hell? Would it have killed her to say, "Thank You?" If it was MY dog, I would be ecstatic that not only he was found, but someone took the time to call instead of keeping such a high-dollar, high-demand dog as a Yorkshire Terrier.

Poor little guy. He had been outside awhile to be so wet.

I hope he didn't get into too much trouble. It wasn't his fault. 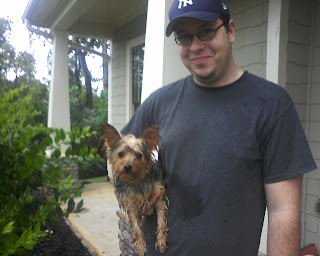 If you call up a company, ask a question, and the company provides you a response, don't argue with the company that their response is wrong. Obviously, if you think the response is wrong, then you must know what the "real" answer is, so what was your point in calling in the first place?

We offer you suggestions when you tell us we are wrong such as a different technique, or what you need to do to achieve the results you want. Yet, you argue with us that that's not what you want to do, you want a "quick fix."

We tell you there are no "quick fixes," but if you follow these steps, you'll reach the same conclusion. You ask us who makes this product for us (while you're looking at the label that says, "manufactured by" and gives our company's information). We reply that we do.

If you're all knowing, and you don't want to listen to actual advice from the manufacturers of the item you're questioning, don't call.
Posted by Jack at 11:26 AM No comments:

Every [rain] cloud has a silver lining...

In case you were oblivious to the weather the past couple of days, it's been rather rainy and wet. It wasn't necessarily stormy except maybe in the night, but for the most part it was very.....wet. The little trickling creek in my backyard has been replaced by Class I rapids, but it still doesn't pose a threat to us. I feel like I'm living on the Chatooga rather than your typical creek.

Every cloud has a silver lining, and this past weekend is no different.

Unlike other Georgians, Andrew and I decided to get up and get moving on Saturday and Sunday. On Saturday, we braved the torrential downpours with Grimm in the back seat to go to the Georgia Classic Cluster Dog Show down in Atlanta near Conley. While we were there, we only saw one other German Shepherd: an incredibly skinny female puppy, maybe 4-5 months old. A little old lady came up to us and started talking to Grimm (and Grimm, in turn, started responding). She said she used to breed and show German Shepherds for forty years. She asked how old he was, and we told her, "8 months." She replied that he was "absolutely gorgeous."

Afterwards, we headed to Jasper and decided to take a round-about way back, stopping at Andrew's parents house (his parents who weren't home). Andrew grabbed a gift bag and brought it back with him, setting it on the coffee table.

Later on that day, he told me to open it as it was my one year anniversary/birthday present: it was a telephoto lens for my Nikon DSLR. I was thrilled (and still am).

Yesterday, we spent our one-year anniversary watching movies while it rained outside. We took a brief walk down to the creek to see the rushing waters and joked about putting a kayak in....but not knowing where it would end up.

We didn't do anything incredibly special for our one-year anniversary, but in case you couldn't tell already, we're not extravagent people. We reflected on some funny things that happened when we first met, I said I should have baked chocolate chip cookies (how I wooed Andrew in the first place), and we just said how very happy we were and how we fit and matched so well. Neither one of us are push-overs, and we have an open line of communication at all times. If something is bothering us, we talk about it before it even starts to bother us. If either one of us have had a rough day, the other knows exactly what to do to change it. In the one year we have been dating, we've never had an argument. We TALK instead. 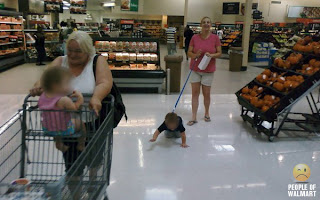 I always wondered - if your kid is on a leash - what training method do you use?

Do you train in English or German?
"Charlie....SITZ! PLATZ!"

Can you train your kid to sit, stay, heel, and come? What about other commands like, "speak" or "leave it?"
Posted by Jack at 11:37 AM No comments:

Only the best funny forward I have received....

I normally HATE forwards, but this was too good NOT to post: 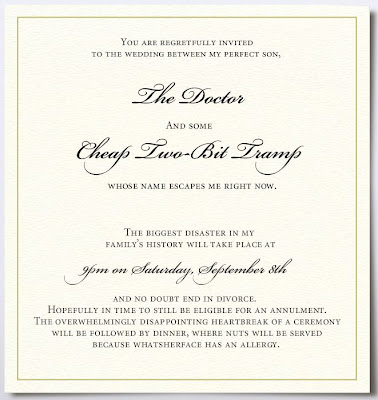 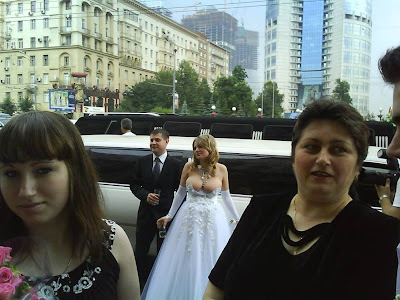 Who Got the Call? Buster Posey got the call...

From a friend with first-hand information, Buster Posey (of the Giants' Fresno Grizzlies) got the call today moving him up to the Giants. Don't go looking for any announcements right now besides "rumors" on other websites...you won't find any.

Okay, so forgive me if I'm a little slow, but I just started watching LOST (from seasons 1 forward), and each time a character is introduced, a little sliver of light sparks in my brain:

Those are three of the characters that stood out to me based on my knowledge of them.
Posted by Jack at 4:43 PM No comments: