We decided to rent a cabin in Dahlonega for the weekend. Kim, Mom and Dad, Andrew and I were all headed to Dahlonega and Dillard so mom and dad and Kim could see where Andrew and I would be getting married/having our reception.

We answered an ad on Craigslist for a man that had a cabin for rent in Camp Glisson. It was a rustic cabin: built around 1950 by a family who had lived in the Dahlonega area since the early 19th century. They were here when North Georgia College was founded in 1873, here when the square was still dirt, etc. They had built the cabin in 1950 before the family moved towards Atlanta, but they've kept it in their family ever since. It was a simple bungalow-type cabin, tin roof, large screened side porch overlooking Cane Creek, a stone foundation that was made from stone in the area, and 200 ft from the top of Cane Creek Falls. Sounded great.

Andrew and I were the first to arrive on Friday. We pulled up and said, "wow." There were wooden green shutters covering the windows. Some of the shutters were rotted or cracked, but...we thought, gives it character. We get inside, and the cabin smelled like an old cabin - musty, woody, etc. Still.........okay. The rush of Cane Creek Falls could be heard from almost every room of the cabin. As we're checking out the cabin, we come across the back bedroom which contained a single lamp on the chest of drawers and four twin beds. We started opening up windows to air out the cabin, and this room was no exception. We opened the screens, slid back the windows (pocket windows) and latched open the shutters. We did this all through the house.

When it came time to meet Val and Jamie for dinner, we closed the windows, and in the back room, we closed the shutters and bolted them shut, closed the windows, closed and latched the screens, and closed and locked the door. When we came back from dinner with Val and Jamie, we noticed the door to the back room was ajar. I closed it and locked it again (you could lock all of the doors in the cabin from the hallway - thus, you could lock someone in a room.)

The next day, we met Mom, Dad, and Kim in Dahlonega, drove up to Dillard, etc. and came back to Dahlonega. When we got to the house, the door, again to the back room, was ajar. I showed Kim the room because you got a heavy/eerie feeling about it. The screens were latched, windows closed, and shutters bolted shut. I firmly closed the door, again, and locked it. I tried it to make sure it was locked. We ran to Wal-Mart to get beer, and when we came back...the back bedroom door was ajar. I checked it out, windows still closed, etc. and closed and locked it again.

The next morning when we woke up, I noticed that the shutter in my bedroom had been opened...and latched. We had closed it on Friday night. I opened the screen, slid open the window, and leaned out to close the shutter. As I was leaning out, I looked to my left and saw that the back room's shutters were wide open...and latched on the outside of the house to keep them open. "What the?" I said, "Uh, honey. The shutters to the back room are wide open and latched against the cabin."

We went into the back room - door was locked - and when we opened the door, we noticed that all four shutters had been opened and latched against the side of the cabin - keeping them open. The wind did NOT do that. The wind didn't sling open (unbolt top and bottom) four shutters and then latch it against the outside of the cabin. Two of the shutters we didn't even open on Friday because the windows wouldn't budge. I went in, opened the screens (that were still latched,) slid open the windows (two of which needed to be budged out of place to slide,) reached out, unlatched the shutters and brought them back in towards the windows. Again, I bolted the top and the bottom of the shutters, slid the windows shut, closed the screens, and latched them as well. This time, I left that room's door open.

It was about that time that I said, "let's pack up and get the Hell out of here." We did, and in record time. 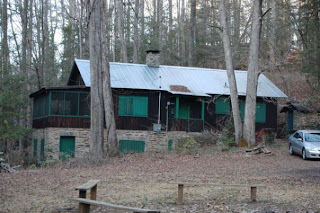 Irish Name does not equal "PUB."

We tried a place called "Paddy's" last night with friends of ours. We walked in, and we just shook our heads. We sat down at the table, and our (clueless) waitress comes over to us. I asked if they had any ciders (being a "Pub" and all.) She said, "Um - I will have to ask." Friend of ours held his hands up in the shape of a 22 oz. beer. He said, "I'd like a beer." She says, "We um don't have a boot." He says, again, "I'd like a beer." She says, "Um, we don't have glasses like that, but I can get you a pitcher." Finally, his wife says, "He'll have one of the specials." The waitress comes back to me and says, "Um we have Smithwick's..I mean, that's a cider, right?" I just said, "I'll have a water."

The menu was full of mozzarella sticks, buffalo wings, etc.

The trainer for the waitress comes over to see how we're doing, "You don't want to order anything yet, right?" ... See More

She comes back. Gray tells her the confusion. He asks what the alcohol content is in the MGD 64. She says, "None, right? Like there isn't any, right?" We looked at her blankly and said, "it's definitely an alcoholic beer." She then proceeds to tell us about she and like her friend like totally drank 18 of them and like she totally left the pool sober as a bird! *shakes head*

She comes back to the table and says, "We have this Strongbow stuff, is that right?" I said, "YES....one, please."

Moral of the story...just because your name is "Paddy's" with a Leprechaun, and you claim to be a "pub," YOU'RE NOT A PUB!
Posted by Jack at 2:37 PM No comments:

...for me to stop biting my nails! But at least I did it! 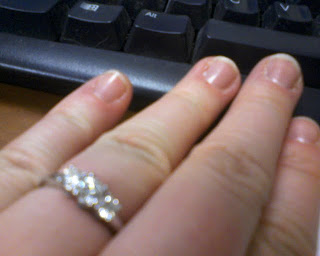 While I was at Play N' Trade this weekend, I was introduced to the Retro-Duo by Retro Bit. The salesperson told me I could play NES and SNES games on the console. WHA'?! And avoid the flashing grey screen of death common with most NES (or the constant resetting, blowing into the cartridge, etc.) So I took a chance, and I bought it along with two NES games: Super Mario Bros. and Jeopardy.

It's very small...as in slightly larger than a VHS tape and works off standard RCA.

The only Con I have found thus far is that the buttons on the controller are incredibly tight so after playing for fifteen minutes, my fingers and fingertips hurt.

HOWEVER, that can be remedied by breaking in the controllers more OR (be impatient and) buy SNES controllers since they work off the same connection.

You just have to remember that the "AB" for NES games (like "Contra") are "YB" on the SNES/Retro-Duo controllers.

As an engagement gift, my mom and dad got Andrew and I the NuWave cooker ("as seen on t.v.".) Last night, we tested out by cooking two chicken breasts, and it worked. The chicken was also super yummy, moist, and - excellent. 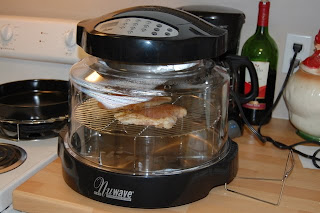 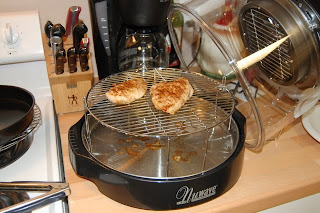 Today we're testing it out to cook a frozen turkey breast (4.5 lbs.) I'll let you guys know how it turns out. So far, we only had to cover the breast with tin foil as the skin was browning too quickly.

ETA: Okay so we cooked our turkey breast (that was frozen solid.) It took an hour and twenty minutes to cook and came out like this: 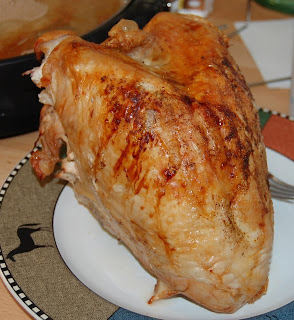 Super juicy, flavorful, and fully cooked!
Posted by Jack at 4:05 PM No comments: