Our Christmas started on a sad note: my parents drove up from the south, and Andrew and I drove down from the north to meet in Columbus, Georgia and bid my brother goodbye for a year as he headed to Afghanistan.  After our goodbye, we headed back up to our neck of the woods, and we waited for Christmas Eve to arrive.

I neglected to share with you guys some of our decorations this year, so here you go (descriptive, I know!) 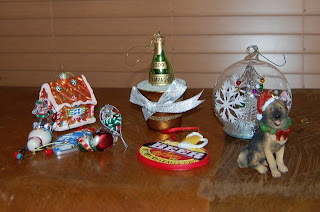 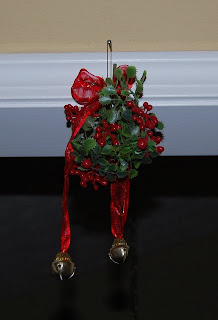 We spent Christmas Eve night at my brother and sister-in-law's house.  My parents drove up from the south, and my SIL's mother drove over as well.  I donned my girlie apron, threw on the "Chef Ramsey" face, and Andrew and I seared the yummy diver scallops for the dinner while my mom checked on the beef roast in the oven.  Needless to say, it was a yummy Christmas Eve!

The next morning, we headed back over to my brother and SIL's house for "Christmas."  We were there for about an hour when I noticed snow flurries starting to fall.  By the time we unwrapped our gifts and loaded them in the car, it was time for us to head to Northwest Georgia for Andrew's parents' Christmas.  By the time we got up 75, the snow was accumulating, and when we got up to his parents' house, this is what we did: 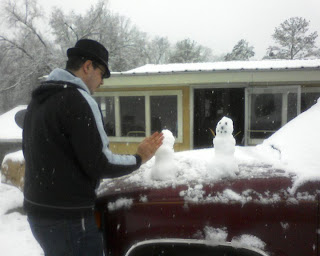 Yup, that's Andrew making his snowwoman..."just right" on the hood of his dad's truck.  By the time he was done, it was one voluptuous snow-woman and Joe Average Snowman. 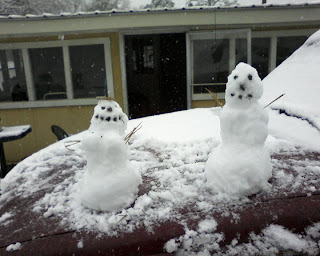 By the time 4pm rolled around, we knew it was time to go.  The dropping temperatures meant the melting snow and sleet would make the roads pretty darn treacherous, and knowing where we were currently would mean attempting to climb long hilly roads.  We opted to take US-41 back down south to our house as we avoided I-75 and the idiot drivers.  It took us 2 hours to get home, and it usually takes us an hour and a half, so we were okay.

Of course, our dogs had been in their crates while we were gone, and when we returned to let them out to potty, they both charged out of the open door (I had opened it while Andrew let them out.)  They stopped in their tracks once they realized there was snow and proceeded to turn into blithering idiots.

All-in-all it was a good Christmas although my brother wasn't here this year for his short "that's what she said" or flatulence.

Here's hoping everyone else had a safe Christmas/Hanukkah as well.
Posted by Jack at 8:55 AM