Snow: It's a Love-Hate Relationship.

I love the snow, but what I hate is the people who "think" they know how to drive in ice and snow...and don't.

When I saw the rapid rate at which the snow was falling near our house, I thought, "well...tomorrow is a definite snow day."  That thought was confirmed when, at 5:30 the next morning, I received a text message from my manager with two words: "stay home."

I did, and I took some pictures while I was at it. 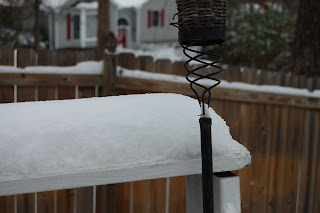 The above picture is the accumulation of snow on our back deck.  When this picture was taken, an inch or so had already melted due to frozen rain overnight. 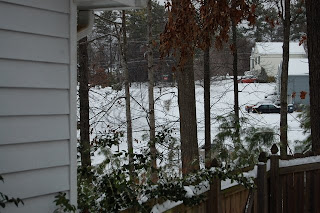 As you can tell, the road leading out of neighborhood hadn't been traveled, but that was probably due to the fact that the MAIN road hadn't been touched. 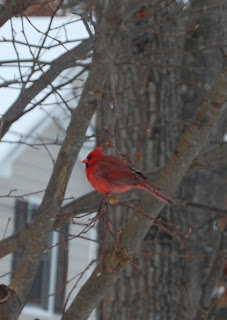 After the snow, our backyard became a bird wonderland.  We had male (seen above) and female Cardinals, Blue-Jays, and red-headed woodpeckers. 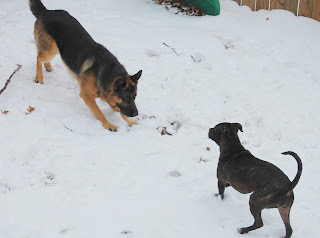 Gidget loved the snow the night before (it was soft and powdery,) but she was not too keen on the ice-covered snow the following morning.  Grimm, on the other hand, couldn't care less.  Snow is snow in his book, and he is the epitome of "snow dog."

Tuesday, I couldn't get out of our neighborhood let alone venture out onto main roads, but today (Wednesday) was a different story altogether.  Andrew and I headed out to our respective workplaces, and I took it slow and steady.  The majority of the roads I traveled were iced over, and I'm not talking, "ooo watch out....a patch of ice."  I'm talking 2-3" thick of ice and snow you have to crawl over.

It took me an hour and a half to drive seventeen miles this morning.  I had idiots riding the bumper of my car, people slamming on their brakes when they saw ice, people RIDING their brakes going down icy hills, and generally just a bunch of idiots.

I got into work, and I was the only one here besides June in the front office.  My co-worker got in around 9:30 or so, and we are the only two from our company here today.  My manager is sitting bedside at the hospital with his wife who will probably go into labor this weekend, and my other co-worker is stuck at home.  I am leaving today at 3:00 p.m. before it freezes over again (or earlier - who knows?)

Things wouldn't be half as bad if Atlanta was prepared (the DOT, mayor, and governor all keep saying "we weren't prepared...it snuck up on us,) but that's a bunch of bullshit because the news channels were predicting it a WEEK IN ADVANCE.
Posted by Jack at 12:08 PM