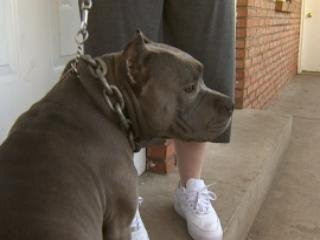 HOLLAND, Mich. (WZZM)- A Holland woman has an unlikely hero to thank after breaking up a domestic fight.

The 32-year-old's estranged husband beat her and attempted to abduct her from her safe house in Holland.

The plan was foiled thanks to a dog which usually gets a bad rap.

The fight between Steven Schumacher, 33, and his wife was very public. Witnesses say he beat and dragged his wife across the street, attempting to get her into his vehicle.

But the fact the fight was public may have helped. That's how Blitz saw the events unfolding from his window, and 'blitzed' to the rescue.

Judging by his barking through the window, we're presuming Blitz is no fan of cameras.

Blitz is a two-year-old, hundred and something pound pit bull; yes, the kind many fear.

"He'll protect us when we need it," says his owner. "But he's a great house pet, he's great with my kids, he's wonderful."

Due to the nature of this tale Blitz's owner does not want to be known.

She says close to 11:00p.m. Wednesday she heard screams for help.

"It's still surreal," she says. "I haven't even slept yet, (I'm) still kind of shaken about what could have happened to her."

She saw Schumacher beating and dragging his estranged wife.

"(I was) scared of what could have happened to her, because he was close to getting her in his car."

Blitz saw it too.

"He about knocked me out of the door to get to them. I heard her screaming, 'help me', repeatedly and I came out my front door and my dog spilled past me and went and scared him a little bit."

She says he never bit anyone, but scared Schumacher just enough that he loosened his grip on his wife, who then ran inside Blitz's home and waited for police.

"I'm very proud of him," chimed in his owner. "He would never do anything unless the situation was like that when he feels that we're in danger."

1) "Blitz" is nowhere near "a hundred and something"
2) I really wish the owner would have taken the damn logging chain off his neck! How ghetto.
Posted by Jack at 4:30 PM