We had planned on doing "our Christmas stuff" last Sunday (the 13th,) but as many of you know, my Grandpa (NY) passed away, and I flew up to New York for his burial.  Our plans for this coming Sunday included driving up to NE Georgia to pick up some Christmas gifts and things we had seen for our wedding in August.

On Saturday, I took the time to clean our house and move our cedar chest to a new residence so that our Christmas tree would have a proper home (away from the heat vent and away from the fireplace.)  When I told Grimm what was going on, he decided to be a placeholder for our tree. 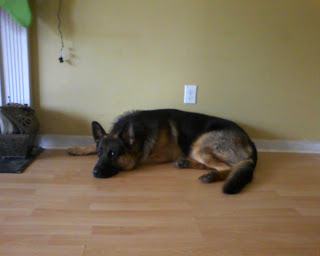 Andrew came home from work, and he was dead-set and determined to get a damn live Christmas tree.  Knowing that our other dog is a canine beaver, I thought a live tree would be a BAD idea, but it was "tradition," and far be it for me to balk at tradition.  We loaded up in the Tahoe, and we drove a few miles to his uncle's Christmas Tree farm (nice, right?)
We were the only ones there as we pulled up to hundreds of trees ready to be harvested for our home.  I tend to like Frasier Firs, but Andrew had Carolina Sapphires in mind.  After walking all the way to the back of the property and back up (because, Heaven forbid, we get the nice 5-1/2 ft tall Carolina Sapphire,) we chose a nice and full Carolina Sapphire.  I stood while Andrew sawed, and in a matter of minutes, we had a tree.  Andrew was dragging it like a caveman might drag his partner.
After talking for a few minutes (and asking what the asking price was on the log cabin and 5-1/2 acres) we hoisted the tree into the Tahoe, and off we went.
A brief trip to Target later, and we were home: armed with some "filler" ornaments for our new tree.  We prepped the area, and up came our [big ass] tree.  Trees look smaller when they're standing there and minding their own business.  However, once we got it mounted in its stand, we realized our Carolina Sapphire was a whopping 7 to 7-1/2 feet tall and 5 feet in diameter at its base.  That's a big friggin' tree!  We had to stop and get more lights for it (as we didn't realize how big of a tree we were getting,) and when we were finished, we let the dogs out to investigate (they had been crated the whole time.)
Our canine beaver decided that she had never seen a pine tree before, and it startled her because as she went in to further investigate, a branch snapped back and whacked her on her rear end.  She has since decided that she would NOT want to be a victim on the next "When Christmas Trees Attack," and is admiring the tree from afar.  Grimm has decided that the water in the tree stand is going to taste better than his water so he's been trying to figure out how to get his nose past the tree skirt to get a swallow.  His ear will hit a sleigh bell on the tree causing it to jingle, and he's pretty sure that's the tree's alarm system and quickly retreats.
Unfortunately, both dogs know how to open gifts so our Christmas gifts are perched on our dining room table. 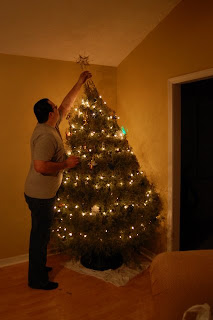