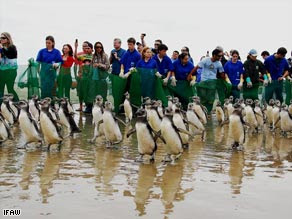 Flying penguins are unusual. Especially when they fly on a C-130 Hercules military plane.

In Brazil, 373 young Magellanic penguins were rescued, rehabilitated and released last weekend after their search for food left them stranded, hundreds of miles from their usual feeding grounds.

Animal-welfare activists loaded the birds onto a Brazilian air force cargo plane and flew them 1,550 miles to the country's southern coast, where a crowd of onlookers celebrated as the penguins marched back into the sea.

"We are overjoyed to see these penguins waddle back to the ocean and have a second chance at life," said veterinarian Dr. Valeria Ruoppolo.

Magellanic penguins are warm-weather birds that breed in large colonies in southern Argentina and Chile. The young animals then migrate north between March and September, following their favorite fish, the anchovy. The birds are named after Portuguese explorer Ferdinand Magellan, who first saw them in 1519.

But changes in currents and water temperature apparently confused the juvenile birds, who strayed too far north to the warm beaches of Salvador, Brazil, 870 miles north of Sao Paulo, Brazil.